Feeling flushed from the verbal battle—but still clad in trousers—I emerged later to find myself confronted with the carefully blank faces of Rawley and Ingersoll, both seated at the cabin table and surrounded by papers. Pretending they hadn’t just heard the row, I cast about for a safe subject. And came up blank, except for inane inquiries about the logbook or supply lists. So I proceeded outside with as much dignity as I could muster, looking for an escape from my riled emotions, frustration and embarrassment. And a little bit of triumph. I was still wearing my trousers.

His parting condemnation still rang uncomfortably in my ears. “I’m captaining a poorly named ship if I can’t get Obedience from my own wife!”

I wanted a smoke. I’d never tried Obadiah’s pipe—though it smelled better than my cigarettes ever did—but I wasn’t about to flounce back into the cabin and ask to borrow it. I tipped my head back as if I were exhaling a cloud of smoke instead of a cloud of emotion, and my eyes lit on the ratlines and rigging. Before I’d even thought about it, my foot was on the first rat-board and I was climbing the rope-and-wood ladder that led to the first yard of the mainmast.

The ratlines are remarkably stable, relative to the ship—the challenge being that the ship itself is in constant motion. The higher you climb above the deck, the more exaggerated that motion becomes, in the same way that a person on the seat of a teeter-totter experiences a wider range of motion than a person sitting near the center fulcrum. I reached the lower yard’s footline, running beneath the yard for sailors to stand on while they work with sail, and stood there for a moment hugging the bunt where yard and mast connect.

I realized I was taking refuge in naming things, distracting myself from nerves aflutter at this first venture into the world above the deck. And another world it is. We humans are accustomed to living in a two-dimensional world, where we just run about on the surface. But a ship encompasses three-dimensional space where you can move about above that surface. And it’s a whole different view, even from that lowest spar.

Instead of climbing higher, I moved outward along the spar toward the starboard yardarm, gaining an entirely different angle. At the end of the spar I stood over the water, past the perimeter of the deck below. From out here I could actually get a broadside view of the ship in motion, with the white water curling away at her waterline and the geometry of her lines and rigging stretching upward and downward from where I stood.

I goggled in every direction, my arms wrapped firmly over and under the horizontal wooden spar, feeling strangely elated despite the splinter lodged in the palm of my hand and the pressure of the footrope into my arches and the precarious nature of my perch. Well, sailors managed this in the worst of tempests, and while making themselves useful to boot.

As if my thought had summoned the reality, I heard a bellow from below: “All hands to shorten sail!” A handful of men swarmed up the ratlines to each of the three masts, while I craned my head to see the cause of the activity—a dark line of clouds astern of us and clearly traveling faster than our fat little ship. Whalers are built to stay afloat for long voyages and haul home prodigious amounts of oil. They aren’t built for speed.

I stayed put, not wanting to cause a traffic jam by trying to descend while the “real” sailors climbed up. And then, once they’d passed me by for the uppermost yard, I stayed put for the closer view of the proceedings. The men above me scooted out along the topgallant yard, two to a side, while others below handily slipped some lines off the pins lining the rail and manned other lines ready to haul.

“Douse the main topgallant! Clew down!”

With similar commands being simultaneously directed at the foremast and mizzen-mast, Clarke below me eased out the halyard to lower the top edge of the sail, “Swede” Johanssen and a black sailor called Carver keeping the opposing sheets and braces taut, and the men above gathering the collected canvas into great armfuls.

“Clew up!” Attention below turned from the now-slack halyard and sheets to hauling on the clewlines, followed by buntlines and leechlines to snug up the sail into its gear. The men aloft thriftily secured the furled sails with gaskets and swarmed back downward to the next level, where the process quickly repeated on the upper topsail—this time with more difficulty as heightening gusts of wind whipped at the loosed canvas and the lines and the clinging men.

I collected myself and took the opportunity to scramble down to the deck before they descended again to my level—though I realized I knew a great deal more than some of the green hands and could have been at least as much help as they. Still, an error on my part would draw more attention—I’d feel bolder and give it a go sometime with less at stake.

I dropped to the deck, careful to keep out of the way of the men and lines along the rail, and made my ungainly way across the heaving planks to stand behind Obadiah at the helm. I knew he hadn’t missed my descent from aloft—I didn’t want to add another layer of fight to the standing question of my attire, but he had more on his mind at this moment.  On all three masts the hands were reefing the lowermost sails, decreasing the sail area in preparation for the squall beginning to envelop us. Pelting raindrops seemed to be flying more than falling, and the temperature must have dropped by twenty degrees.

I ducked down the hatch and through the empty cabins to grab my oilskin from its peg on the wall, wondering if I should take Obadiah’s as well. I decided against it, thinking it would undermine his omnipotent image to have a wife hand him a coat in the middle of ongoing operations while everyone else worked in soaked shirtsleeves.

The choppy water had lost all semblance of regular wave-rhythm, and it took an effort to keep my feet planted, even hanging on to the aft rail for balance. I was getting a double soaking, freshwater from above and salt spray reaching over the rails. The whole color palette of the day had changed as the sun disappeared and the storm took sway.

Our surroundings had changed so quickly. The old sailor’s adage—not to be caught unawares by a squall—seems like a no-brainer, but I could see how easily it might happen without a sharp lookout. I’d thought of that mast-top lookout as a watch for sails or whales (less likely here than in the Pacific, but not impossible), but that’s because I’d been spoiled until now by clear weather.

Obadiah had turned the ship just enough to keep the stern to the storm, running before it in a manner that reminded me of surfing. At least out here in the Atlantic we didn’t have to worry about running into anything. I remembered what he’d said earlier about “things you can’t control.” We’d ride this storm where it took us, and then adjust our course accordingly 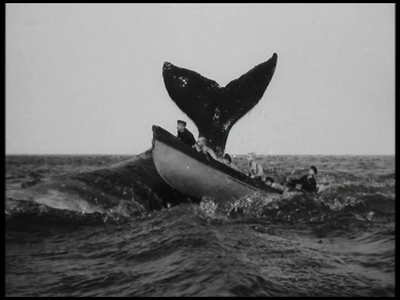